On Sunday, the Emerson High School (part of the Frisco Independent School District (FISD) counselors’ Instagram account reposted a “self-help” graphic from another account. While some of the advice was relatively innocuous, like “don’t pressure yourself” and “prioritizing self love is important for your mental and physical health,” one of the tips was “toys can help you overcome your sexual anxiety.”

The original post was meant to advertise a discount code for the “Empress 2 clitoral vacuum stimulator.” With that in mind, other tips like “you won’t know what you like best until you try it” become much less innocent. 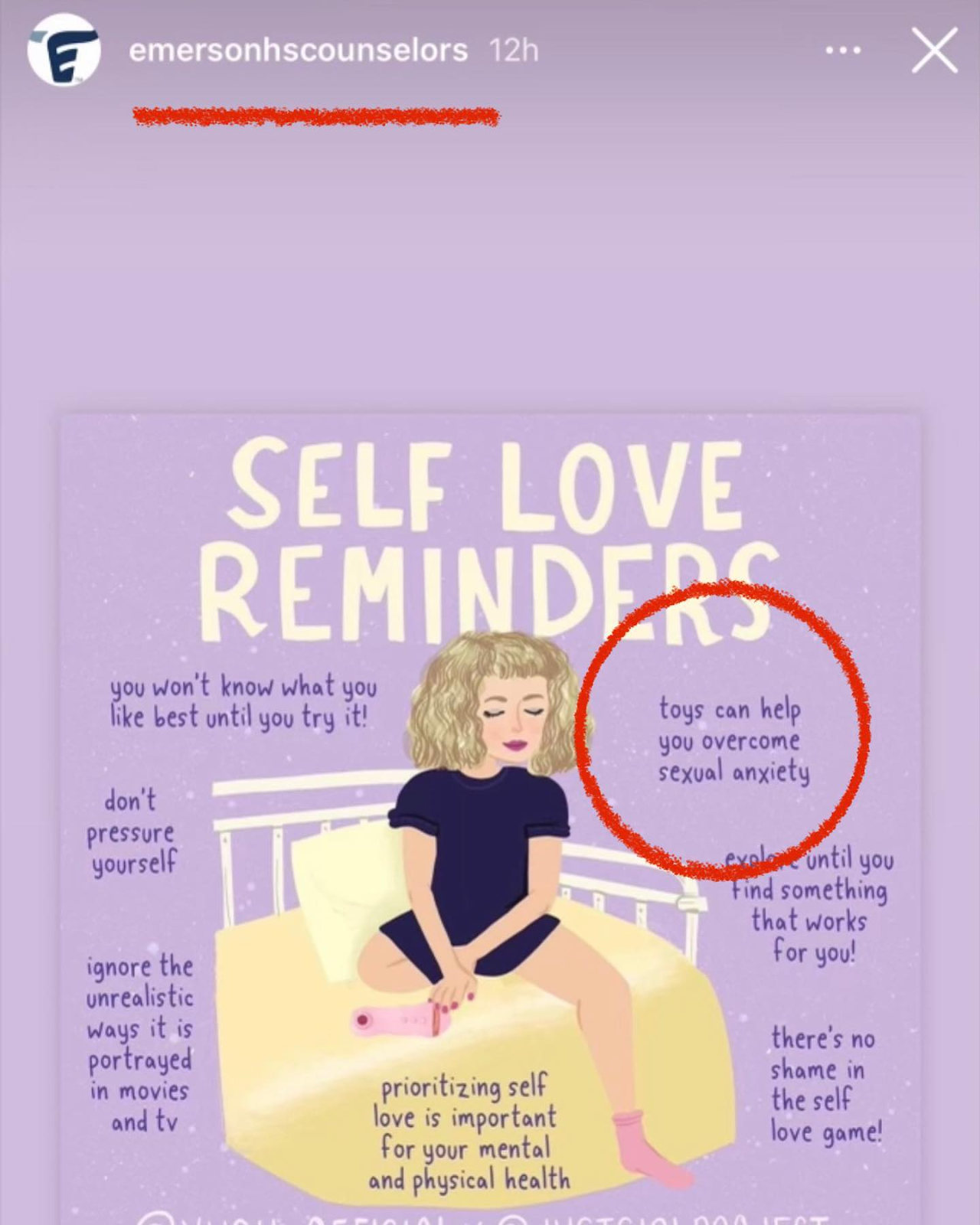 The post quickly came to the attention of state representative Jared Patterson, who represents a portion of Frisco in the Texas Legislature.

“The sexualization of our kids has to stop. The lack of accountability has to stop. The lies have to stop. The cover ups have to stop,” Patterson, whose children attend FISD schools, said in a Facebook post. “Why anyone thinks it’s okay to promote sexually explicit materials to our children is beyond me. A culture where any staff member thinks this is acceptable behavior is highly concerning. Where is the accountability? As an elected representative of the people and policy maker, does the Board President have an opinion on whether any of this is appropriate?”

In a since-deleted tweet, FISD’s government affairs division responded that they acknowledged that the material within the graphic was inappropriate, and had been the result of hacking. However, it was not long before it was revealed that the account wasn’t hacked after all.

“Over the past several days, District and campus administrators determined that a staff member reposted the content from another account believing it to be content about self care without actually reading the text of the post. Later, when the staff member realized their mistake, they removed the post and posted that the account had been hacked. When District and campus administrators learned that was not true, the entire account was disabled,” FISD, which offers a course about responsible social media usage, said in an updated statement.

“We sincerely apologize for resharing the inaccurate post. We were attempting to respond quickly with what we believed to be true information. In the future, we will verify such posts from other District accounts prior to resharing them,” the district continued.

If the updated statement’s comment section is any indication, parents aren’t buying the district’s excuses.

“I don’t know that I buy FISD’s explanation that they posted without reading the attached text, because why would anyone do that?” Darrell Hale, a Collin County commissioner, who has a daughter at Emerson, told Chalkboard Review staff in a private communication. “You could be publishing some horrific symbol or innuendo that is new unwittingly. No matter what, it is a failure of oversight,” he added.

“Please stop saying this was accidental. A person doesn’t even need to be able to read to see the picture. It’s not unclear what this post is. Or are FISD employees surfing the internet with blindfolds on and randomly sharing stuff? Thank you for removing the post, but please take ownership of this problem in a way that can be interpreted as serious by the community,” another parent agreed. 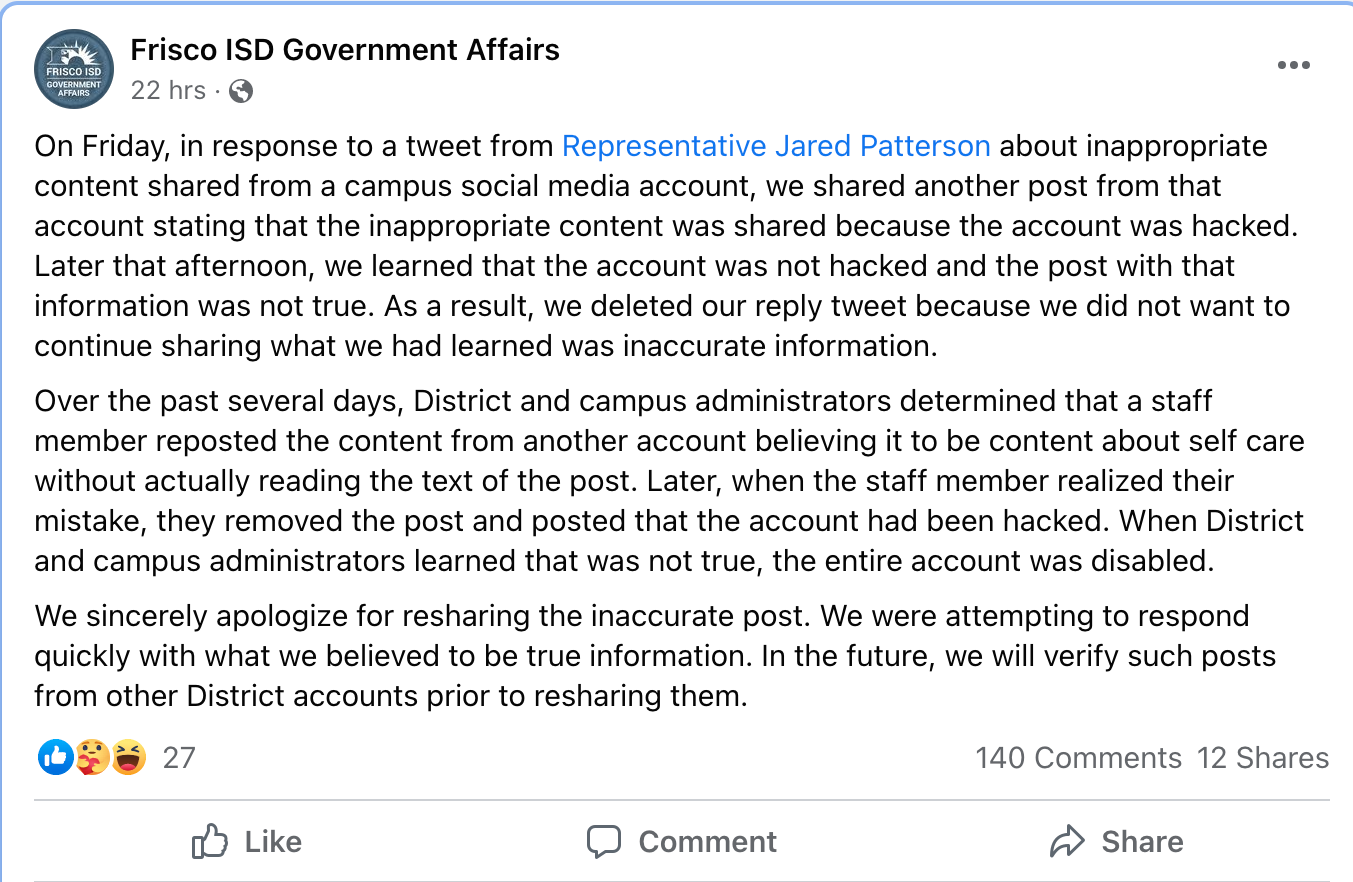 The district has not placed any orders for Empress 2 clitoral vacuum stimulators at this point in time.

Garion Frankel is a graduate student at Texas A&M University’s Bush School of Government and Public Service with a concentration in education policy and management. He is a Young Voices contributor, and Chalkboard Review’s breaking news reporter.

Subscribe to our newsletter to stay on top of the latest education commentary and news everyone ought to know about.